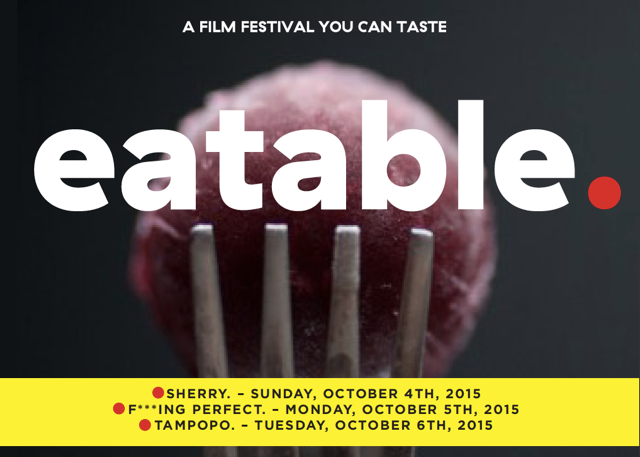 Stand back TIFF, there’s a new film festival in town! And this one involves delicious eats.

The Eatable Film Festival, is a 3 night food film festival that sees
some of Toronto’s hottest chefs creating food and drinks inspired by and to be served at the screenings of each food-obsessed film! Each night features its own totally immersive screening event with its own delicious theme, tone, and taste.

Here are the 3 films that will be playing, and their delicious pairings.

Sherry and the Mystery of Palo Cortado: Sun., Oct. 4, Eatable collaborates with Chef Grant Van Gameren (Bar Isabel and Bar Raval) on the Canadian premiere at The Royal Cinema of Sherry and the Mystery of Palo Cortado, a journey through Jerez de la Frontera, the home of Spain’s great sherry houses, and the story of a comeback. Audiences will enjoy a sherry cocktail, three types of pintxos, and a sherry tasting by Bar Raval during the screening. An optional five-course sherry pairing dinner will follow both screenings at Bar Isabel. (Screening only $50/ticket; screening and dinner $200/per person; two screenings – 3 p.m. and 6:30 p.m. at The Royal Cinema, 608 College St.)

Tampopo, Tues., Oct. 6. For this rare screening of Japanese cult food classic Tampopo, Eatable collaborates with Leemo Han (Oddseoul and Hanmoto) to create a completely immersive eating-watching experience. An Izakaya-inspired menu will be served during the film, with ramen to follow. Considered the funniest film about food and sex ever made, this cult classic is celebrating its 30th anniversary. ($120/ticket at 7 p.m. at The Great Hall, 1087 Queen St. W.)

If you think this sounds awesome, then get your tickets at www.eatablefilms.com!

Eat to the Beat returns for another year

RITUAL lets you fuel up fast at your favourite restaurants