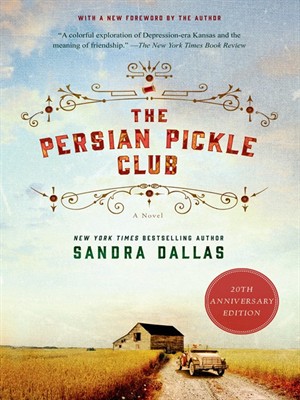 “The Persian Pickle Club” by Sandra Dallas was originally published 20 years ago and I was lent the 20th Anniversary Edition to read. It’s amazing to think that one novel could inspire so many women to go out there and quilt, even starting their own quilting circles. Hopefully, though, none of them are hiding the same secrets as those in the Persian Pickle Club! Set in the 1930s, in depression-hit Harveyville, Kansas, each week the ladies gather to quilt and gossip, however, they are tied together by one big, dark secret.

When a new member joins the group, this secret is in danger of being exposed. I wouldn’t classify this book as a mystery as most of the novel is really a look into what life was like for women in a small town during that era and the types of characters that you would find if you visited there. Although they are a quilting circle, it isn’t a “quilting novel” either. Each of the women represent a normal, hard-working person who is trying to make ends meet and the ties that bind the group emotionally as friends.

This was a fast read and definitely one to enjoy while sipping a cup of tea (or hot chocolate) and curled up on a cold afternoon.

Jennifer is a bibliophile living in the ‘burbs, but remains a city girl at heart.  When her nose isn’t in a book she is crocheting up a storm. Oh, and one time a Starbucks barista invited her to their wedding solely based on the fact she goes every morning for a decaf mocha. So, there’s that.

[ Review ] The Girl on the Train by Paula Hawkins