It’s one of my favourite times of year in Toronto! The Toronto International Film Festival! TIFF runs from Sept 5- 15. Tickets go on sale on Sept 1st at 9:00 a.m. Below are some of the films that I want to see this year!

The Disappearance of Eleanor Rigby: Him and Her 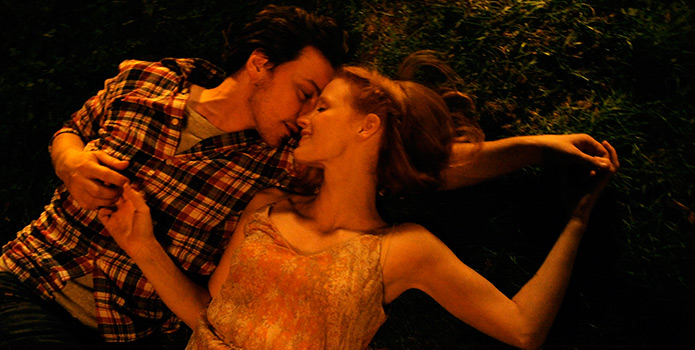 Every story has two sides. The unprecedented cinematic event The Disappearance of Eleanor Rigby: Him and Her sets out to prove just that in this quietly realized, heartwrenching drama from director Ned Benson.

Following a horrific tragedy, the enviable marriage between Conor (James McAvoy), a restaurant owner, and Eleanor (Jessica Chastain), a returning college student, begins to fall apart. With each day worse than the last, their connection starts deteriorating, until one day Eleanor just disappears….

The Lunchbox
In Mumbai, a misdelivered lunchbox brings together two very different people — a neglected housewife (Nimrat Kaur) and a grumpy, solitary widower on the verge of retirement (Bollywood star Irrfan Khan, Life of Pi) — in this funny and touching comedy-drama from first-time writer-director Ritesh Batra.

This decades-spanning epic from maestro Hayao Miyazaki is his most unique films to date. Inspired by the stories of Jiro Horikoshi, visionary designer of one the most beautiful airplanes in history — the famed Zero fighter — and the writer Tatsuo Hori, this tale of love and perseverance in a turbulent world is brought to life by the vivid animation of Studio Ghibli.
Sarah Prefers to Run
Introverted and singularly focused, Sarah lives to run. When she is accepted as a middle-distance runner into the athletic training program at Montreal’s McGill University, one of the best in the province, she is determined to leave Quebec City and go, in spite of her mother’s surprising lack of support, both emotional and financial. A solution comes from an unexpected source, her friend Antoine (Jean-Sébastien Courchesne), who offers to move in with her to help her save money — he even proposes they wed to access funding for married university students.

The Right Kind of Wrong
Leo Palomino is supposed to be a writer. Before his wife left him for his best friend, Leo used to be a husband. Now he washes dishes — professionally — and stands by while his ex publicly broadcasts his apparently infinite number of character flaws on a blog called Why You Suck. Leo is closing in on thirty and not exactly feeling at the top of his game. But he’s about to meet a woman who might change his life forever — if only she weren’t about to marry someone else.

Only Lovers Left Alive
Only Lovers Left Alive occupies a claustrophobic, languid nocturnal world befitting vampires who live a counter-normal existence. Centuries old, they have seen it all, and simply want to be left alone to get on with their (eternal) lives.
A Random Desi Romance
From the writer of Chak De! India and the director of Band Baaja Baaraat comes a modern desi love story.

What’s on the Table at the Stop

Inside Silo City: A Riverboat and Walking Tour in Buffalo