So I decided to try Bistro 990 as my first Winterlicious lunch of the season. It’s claim to fame is that it’s the TIFF go to, so I grabbed a friend and checked it out. From outside, it isn’t much to look at, but inside is beautiful. We were ushered to a cozy corner table.

I started with the Leek & Potato Soup, Shaved Truffle Infused Pecorino Cheese, while my friend had the Bistro House Mixed Salad, Balsamic Vinaigrette. We were served two pieces of french bread, which was (oddly, but not unbecomingly) salted. Perhaps this was a taste of what was to come?

I was pleasantly pleased with my soup. I am not much of a soup drinker, but it was delicious, with the exact amount of thickness and flavour. The Pecorino cheese was a tasty addition. My companion enjoyed her salad. 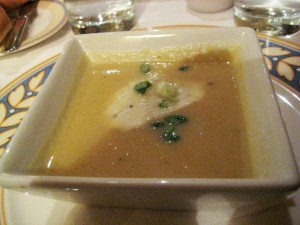 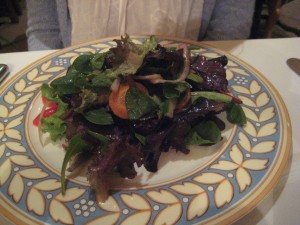 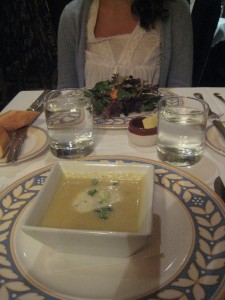 The main course arrived. I had chosen the Black Angus Beef Burger, Aged White Cheddar, Garlic Toast and Frites. My friend had the Sole Filet à la Meunière. I thought that her sole portion looked a little small, but maybe that was just me. I was a bit surprised to see my burger served without a bun, but wasn’t really bothered. The burger was excellent quality and very flavorful. I found the garlic bread a little tasteless and hard. I also noticed that it was the same salted house french bread…an odd combination for garlic bread. Not only that, but they were a little burnt. The frites were nice and crisp. I didn’t feel that they were housemade, though.

My friend took one bite of her sole and commented that it was wayy too salty. I tried a piece and it was. It was too salty with an overpowering lemon flavour. She also didn’t seem too impressed by the bed of linguine the sole was served on. Our waitress noticed that she hadn’t eaten much, and asked if everything was okay. My friend told her that it was a bit too salty for her, and she was asked if she would like anything else but she declined. We were a bit disappointed with our main course, after being started off with such excellent appetizers. 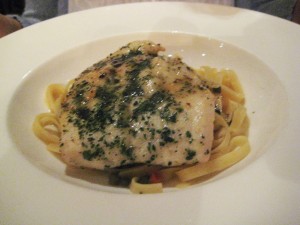 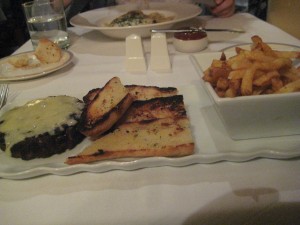 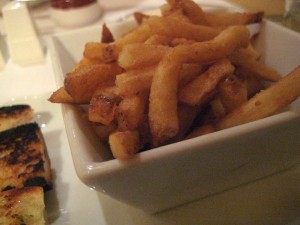 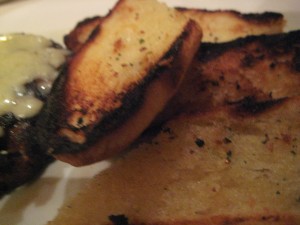 For dessert, we had the Crème Brulée and Apple Crumble, Vanilla Bean & Bourbon Ice Cream. Both were presented quite nicely. The creme brulee was in a tea cup, and my (tiny) scoop of vanilla ice cream was in a cute spoon rest. I found my apple crumble a bit on the cool side, the the apples being just a tad too crisp for my liking in a crumble. Both desserts with served with a tiny assortment of fruits. My companions Creme Brulee made a satisfying crack as she tapped it with her spoon, and declared it delicious. 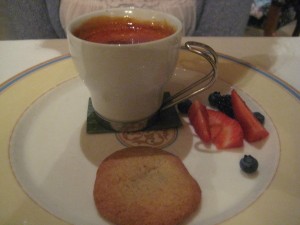 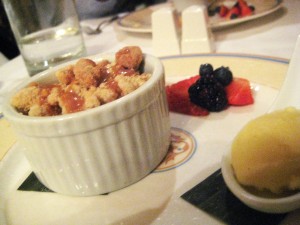 Overall, I was underwhelmed by Bistro 990. The service was good, the food was generally good quality, but could have been way way better. Portion sizes were mostly adequate, and I was left feeling full and satisfied, if not eleated.